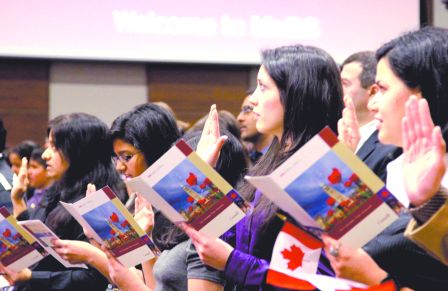 For this year’s Citizenship Week celebrations, Immigration, Refugees and Citizenship Canada (IRCC) took some of our newest Canadians to literal great heights. Citizenship Week celebrations opened with a special outdoor citizenship ceremony at the top of the CN Tower, with 6 of our newest Canadians taking the oath of citizenship while harnessed on the EdgeWalk, accompanied by Minister Ahmed Hussen. This ceremony was followed by other elevated ceremonies at the top of the Vancouver Lookout, on October 11, and at the Olympic Stadium in Montréal, on October 12.

The changes from Bill C‑6 came into effect on October 11, 2017, and provided those wanting to become Canadian citizens with greater flexibility to meet the requirements. In particular, the changes reduced the time permanent residents must be physically present in Canada before applying for citizenship from 4 out of 6 years to 3 out of 5 years.

By the end of October 2018, an estimated 152,000 people will have obtained Canadian citizenship since the changes came into effect, an increase of 40%, compared to the 108,000 people who obtained citizenship in the same period the year before.

Bill C‑6 has allowed more permanent residents to apply for citizenship. In the 9‑month period from October 2017 to June 2018, Immigration, Refugees and Citizenship Canada (IRCC) received 242,680 applications, more than double the 102,261 applications that were received in the same period the year before. Despite the increase in applications, processing times for routine citizenship applications remain under 12 months.